To provide vital weather and climate information, the Australian Government has worked closely with its research agencies to develop a national forecasting system. This system is a major collaborative undertaking, bringing together the climate observations, research and modelling of the Bureau of Meteorology (the Bureau), CSIRO and Australian universities, in consultation with international partners. The result is a weather and climate forecasting system tailored to Australian needs.

In 2005, the Bureau of Meteorology (Bureau) and Commonwealth Scientific and Industrial Research Organisation (CSIRO), in cooperation with the university community in Australia, made a major decision to jointly develop a fully coupled earth system model – The Australian Community Climate and Earth-System Simulator (ACCESS).

ACCESS provides world class modelling infrastructure to meet the complex and demanding challenges supporting meteorological service provision, and the science underpinning climate impacts and adaptation research. ACCESS was aimed at developing a national approach to climate and weather prediction model development that was based on well-engineered and realistically achievable software and supported by high quality IT infrastructure. 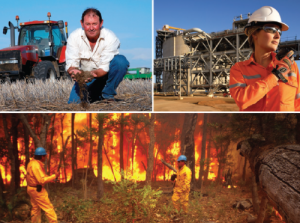 Australia’s present forecasting system—ACCESS—has been under development for about ten years, but builds on 50 years of Australian leadership in weather and climate forecasting. The same system delivers weather forecasts over a few days and projections of climate to the end of this century and beyond. Weather forecasts: Anyone who uses weather forecasts will be aware that they are considerably more reliable than they were ten years ago. Three-day forecasts now have the same accuracy as two-day forecasts did prior to 2009.

Tropical cyclones: Tropical cyclones are challenging to forecasters because they are small and intense. Cyclone tracks are particularly difficult to predict, but are critical in an emergency response. In the last eight years, our forecasts of cyclone tracks have improved by around 25 per cent, with one-day forecasts now accurate to within about 90 km. Tropical cyclone Yasi was a memorable and destructive cyclone that crossed the coast of North Queensland in 2011. Bureau forecasts allowed the community and emergency management agencies to plan and make decisions several days ahead of the event.

Climate projections: The Intergovernmental Panel on Climate Change (IPCC) published its Fifth Assessment Report in late 2013. In preparation for the report, more than 20 international institutions ran earth system models to simulate the climate at least through the twentieth century, to test the behaviour of the models, and then through the twenty-first century to assess the climate’s response to various scenarios for greenhouse-gas emissions. Based on comparisons with historical climate, Australian simulations rank amongst the best of international climate models and are particularly accurate over Australia. The collection of all the simulations, called CMIP (Climate Model Intercomparison Project) forms a very large and important dataset. It is now being analysed by climatologists around the world, to help us understand the dynamics and implications of climate change. Multiple model runs (called an ‘ensemble’) provide far more accuracy and information than single models. As active participants in CMIP, Australian scientists understand the strengths and limitations of the projections, and are positioned to provide expert advice to policy and decision-makers.